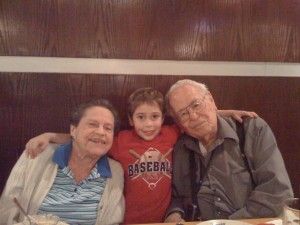 When I joined the family, I got more than a husband and in-laws that I adore. I gained a brother and sister, cousins that I love like sisters, nephews, aunts and uncles, and even more special, grandparents. I lost my own grandparents years before, which made having some again such a special thing.

Right from the start, they insisted on being called Grandma and Grandpa. They were generous and giving to a fault, loved ferociously (especially each other) and set an example for everyone that knows them. I can’t imagine how Grandma is going to go forward without her partner in life these last 69 years. It will be equally hard for their children, grandchildren and great-grandchildren. Of those great-grands, 5 out of 6 are old enough to have solid memories of their Umpa. All 6 will continue to bring joy to Gig’s life, I’m sure.

I know Herb is up there with his parents, his brother, Merton and his sister-in-law, Thelma. He’s already making real estate deals, smoking a big Cuban cigar, and enjoying a cold beverage with his mother. At least he doesn’t have to sneak his cigars any more. 😉